A famous pop singer, director, TV presenter, producer Mitya Fomin gave our glossy magazine an exclusive interview. So, we have decided to publish a «Fashion Story» based on the information that he provided us.

Dmitriy Fomin known by his stage name Mitya Fomin was born in Novosibirsk on 17 January 1974. He is a Russian solo singer, dancer and producer. He was a member of the dance group ‘Hi-Fi’ between 1998 and 2009. His father was an associate professor at the Institute of Communications and mother is an engineer. Svetlana, his sister, is also a singer in a music ensemble of ancient music.

Dima studied at the Novosibirsk Medical Institute. In 1994, being a third-year student at the university, he took academic leave and flew to England at the invitation of his friends. Then the future Russian pop singer went to the USA, where he was forced to look for any possible job. There Mitya studied English, became interested in the American musical theater and began to write his first songs.

As a boy he always imagined himself on the stage, even when he had no idea how to get there. When he was just a kid he parodied popular pop stars in front of a mirror. Dima didn’t want anything so much as to be one of them. This boy did not tell anyone about his dreams. He danced when there was nobody at home. He kept it secret because it was quite strange, being a child of Soviet parents who had nothing common with art or music, to admit such things. However, singing, dancing, performing – all these attracted him much. 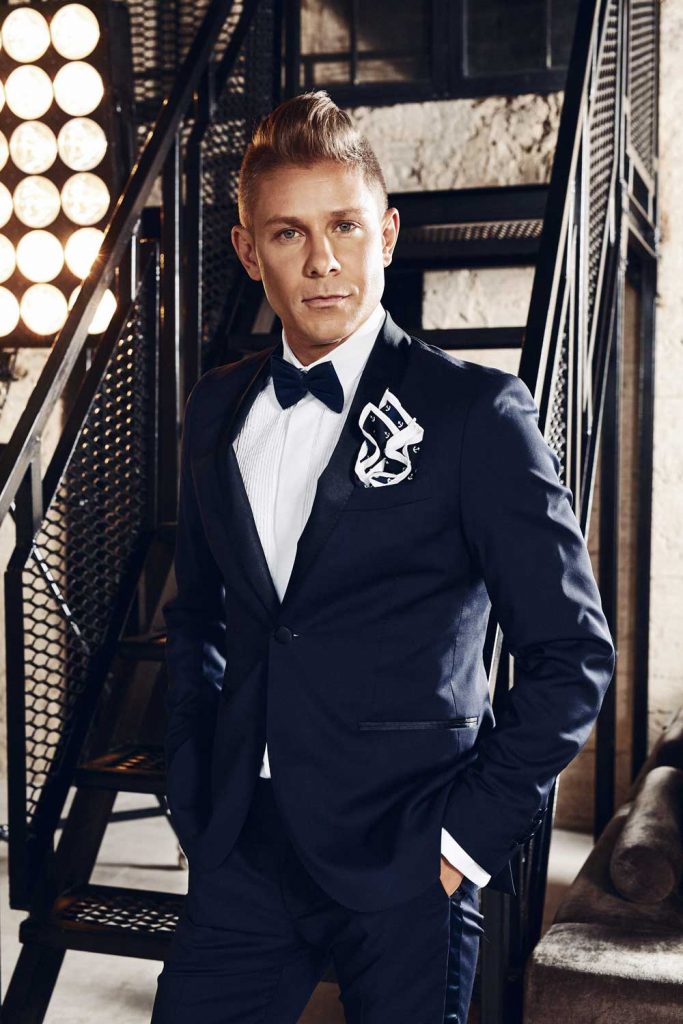 Later Mitya moved to Moscow where his friends – a producer Erica Chanturia and composer Pavel Esenin – offered him to join the music band ‘Hi-Fi’.

August 2, 1998 is the official birthday of the music band “Hi-Fi”. The songs “Is not Given”, “Homeless”, “Forgive” from the debut album “First Contact” made it popular and the album took the highest positions in Russian charts. The successful start of a career and a busy tour schedule forced Mitya to quit the university.

Mitya’s career as the singer in the group “Hi-Fi” lasted 10 years. ‘Hi-Fi’ had a prosperous long career. During this time the band released four albums, recorded such famous songs as “The Black Raven”, “Silly People”, “And We Loved”, “The Seventh Petal”, “We Are Not Angels” and traveled all over the country with concerts. Being in the band, Mitya started working with many talented writers and composers. At the end of 2008 Mitya decided to leave. He came to the conclusion that it was time to develop his own solo career.

Mitya thinks about “Hi-Fi” as a band where he has started performing on stage. The first song was “Call Me Misha”. At that time he had no stage experience and dancing on the stage was challenging. The first song was something like gibberish which made it almost impossible to memorize. Still, it was a television shoot, so they had to lip-sync because there was no right to make a mistake. At that period of life there was a common thing to sing along to the tape. Even today singers are asked to perform songs in this way on different TV shows as it is technically difficult to adjust media broadcasting for each singer.

January 1, 2009 Dmitriy didn’t resign a contract with “Hi-Fi. Mitya had already been forming a personal creative team for two months after the breakup. Still, he was left without the most important thing for each singer – without a repertoire. Singers are loved primarily for their music. And he lost it in one moment. Just yesterday thousands of fans sang with him at the stadium, and, in one day without “Hi-Fi”, he had nothing to say. He had no rights to perform old songs and his personal songs had not been written yet. It was a very difficult period for Mitya.

It took a lot of time to collect necessary material and write and record solo songs. Max Fadeev helped him a lot. The artist is still very grateful to him. So Mitya recorded his first solo song “Two Lands”. It was a release of his debut solo single. The music video with a spaceship topped the Russian MTV charts. The next single «This is it» followed in January 2010. The third single was ‘Everything’s gonna be alright’ with a rapper StuFF. English-language version «Ok!» became a summer hit in Russia and Europe. With these solo hits he released his debut solo album “So it will be” that included his hits and other rhythmic, relaxing and ambient songs.

From a rebel to a creator: Stepan Menshchikov

Dmitriy is a very hardworking and demanding person with regard to the schedule. It is important for him that everything is planned very carefully. If something goes wrong, it makes him upset. When he returns home, it is somewhere around midnight, it is time for him to plan the next day. This talented singer works a lot. He also directs videos for other artists. One work was with Yena’s ‘Exboy’. He was also involved in TV series of Russian reality show “Changing own wives“.

Fomin released a song “City Lights”. It was recorded to the music of the famous British band ‘Pet Shop Boys’. In 2011, this song was awarded the Golden Gramophone. The same year the artist was nominated for two TV awards at once, where he won in the category ‘New Coming’.
In May 2013 Fomin released his second album “Insolent Angel”, which became available on the iTunes.

In April 2017, the singer introduced a new acoustic program, “Tomorrow will be different.” The concert took place in the Diplomatic Hall of the Kremlin Palace. This event was the beginning of the Fomin’s charity tour. The tour had a goal to support the Life Line Foundation. The Foundation helps sick children, to which the artist has been an ambassador since 2008. Mitya became the host of the Russian Chart on the Muz TV channel the same year.
A year later Fomin and Oksana Oleshko performed on stage together for the last 10 years. This happened at the concert “Hands up!” in April 2018. Then Dmitry announced that they had recorded some new songs. Later the information that the band was preparing for the shooting of a new video appeared on the band’s official website.

Today Mitya is one of the most popular singers on the Russian stage. He is a person who can surely say that he has found his destination in life and knows what he is looking for.

Ekaterina Aralova THE BEST MODELS OF THE YEAR 2017*

From a rebel to a creator: Stepan Menshchikov